A mob of men in white shirts attacked protesters with sticks and metal bars at a train station in Yuen Long on Monday. The violence followed earlier clashes between the police and protesters.

HONG KONG — A brazen overnight attack by a mob of men with sticks and metal bars who were apparently targeting antigovernment protesters raised tensions in Hong Kong to new levels on Monday after weeks of demonstrations, prompting fears of violence spiraling beyond the authorities’ control.

Dozens of people, including journalists and a pro-democracy lawmaker, were injured in the assault in and around a train station in Yuen Long, a satellite town in northwestern Hong Kong near the border with mainland China.

The violence followed clashes earlier in the evening between the police and protesters near the Chinese government’s liaison officein Hong Kong, and raised questions about why officers did not protect demonstrators, who have been critical of the police’s use of force in recent weeks.

Protesters painted graffiti on the Chinese government’s liaison office in Hong Kong on Sunday, and threw ink on the crest of the Chinese state displayed there, an act that Chinese officials said “openly challenged the authority of the central government.” Earlier, demonstrators participated in a peaceful march calling for an independent investigation into accusations of police brutality.

On Monday, Carrie Lam, the Hong Kong chief executive, said she condemned both the vandalizing of the liaison office, which she said challenged China’s sovereignty and “hurt the nation’s feelings,” and the mob attacks in Yuen Long.

“Violence will only breed more violence,” she said at a news conference.

Media outlets in mainland China, which had previously given little notice to the protests, carried stories Monday on the damage to the liaison office and Hong Kong and central government officials’ denunciations of that vandalism. A report from CCTV, the main state news broadcaster, showed graffiti on the exterior of the office, and comments on Chinese social media were full of criticism for the Hong Kong protesters.

Riot police officers talking to men armed with sticks outside a train station in Yuen Long, a Hong Kong border town near mainland China. Dozens of people were beaten in an attack at the station late Sunday after a pro-democracy protest.CreditLam Yik Fei for The New York Times 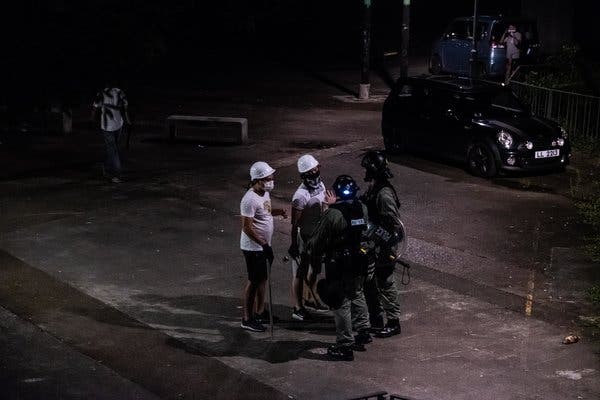 The People’s Daily, the mouthpiece of the Chinese Communist Party, ran a front-page commentary Monday that said the damage to the liaison office “not only trampled on the rule of law in Hong Kong, but also openly challenged the authority of the central government.”

With the attacks in Yuen Long, the protests have entered a stage that many Hong Kong activists fear from past experience: the use of thugs to intimidate demonstrators. The injured said they believed the attackers were members of organized crime societies known as triads, and they have complained that the violence was encouraged by government supporters and ignored by the police.

“I have strong reason to believe they were gangsters,” said Lam Cheuk-ting, a pro-democracy lawmaker who was hit on his arms, hands and face, leaving his mouth with a cut that required 18 stitches to close. “I don’t think any ordinary citizens have done such sophisticated, organized attacks on this kind of level.”

Mr. Lam said he learned that someone was being assaulted in the station around 9 p.m., and he warned the police in Yuen Long. He then went there by train, where he said thugs carrying batons and wearing white shirts were running rampant.

“They repeatedly went into the train and were using batons to indiscriminately attack all the people in the train,” he said. “Many journalists, even a pregnant woman, all ordinary citizens of Hong Kong, were attacked by those gangsters.”

The protests in Hong Kong began weeks ago over a proposal that would allow extraditions to mainland China, but have spread to encompass demands for direct elections for the city’s leader and complaints about the use of force by police against demonstrators.

[In 1997, the Chinese government promised that it would maintain “one country, two systems” in Hong Kong for the next 50 years.]

Mr. Lam condemned the police response to the mob attack as woefully inadequate, saying that the group was seen gathering as early as 6 p.m.

Yau Nai-keung, an assistant district police commander in Yuen Long, said early Monday that officers had made no arrests and found no weapons.

But in one encounter captured by photojournalists, the riot police spoke with two masked men in white shirts holding metal bars or sticks, patting one on the shoulder before walking off.

“It’s unbelievable,” said Mr. Lam, the lawmaker. “The behavior of the police force is really disgusting and shameless.”

Stephen Lo, the Hong Kong police commissioner, suggested that the protests contributed to the slow police response to the violence at the train station.

Clouds of tear gas in the Hong Kong district of Sheung Wan on Sunday.CreditLam Yik Fei for The New York Times 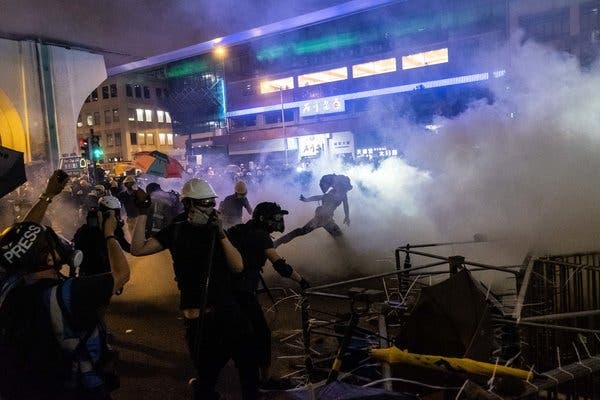 “Our manpower is stretched because every time when there is a major event which will lead to violent confrontations we have to deploy some manpower from various districts to Hong Kong Island,” he said.

On Monday evening, a day after the violence, the police said they had arrested two men in Yuen Long on charges of illegal assembly.

Gwyneth Ho, a journalist for the Hong Kong-based online outlet Stand News, continued live streaming the violence even after she was attacked. Ms. Ho wrote on Facebook that she was bleeding from her head, had bruises on her back and needed four stitches on her right shoulder.

Galileo Cheng, social affairs executive for the Hong Kong Catholic Institution Staff Association, said he took a train to Yuen Long after attending protests earlier in the day. He also live streamed the violence, but his feed went dark after he too was attacked. His upper lip, elbow and hands were injured, and a helmet he was wearing was cracked.

“Those thugs kept assaulting me and even assaulted a woman with an infant at her waist,” he said.

The Hospital Authority of Hong Kong said 45 people were injured in Yuen Long, and one was in serious condition. Another 14 people sought treatment after clashes between the police and protesters near the Chinese liaison office on Hong Kong Island, about an hour south by train.

Locals were angered by what appeared to be police complacency, saying the authorities did not answer their phone calls or register their complaints at the station on Sunday. Terry Lin, a 32-year-old designer, said that he was one of the first people to rush to the local police station after seeing the men in white approach the train station with sticks, but the police eventually closed the metal gates to a growing crowd of residents after registering a few complaints, citing security concerns. 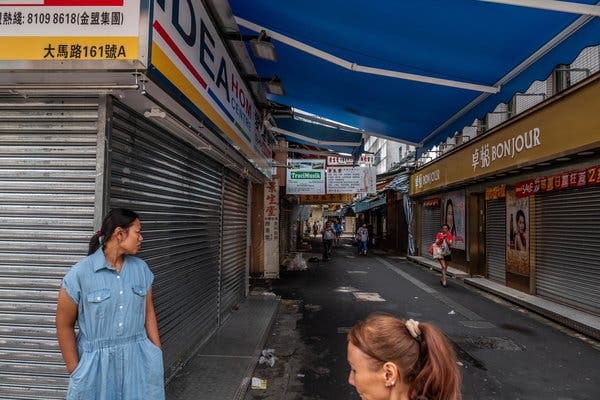 Pro-democracy and establishment parties condemned the violence, but some government supporters were accused of playing down or even endorsing the attacks on the protesters. A pro-establishment legislator, Junius Ho, was seen in a video circulating late Sundaywith a group of men in Yuen Long carrying Hong Kong flags and dressed in white shirts, the uniform of the attackers.

“Thank you for your efforts,” he said. “You guys are my heroes.”

Mr. Ho denied any connection with the attacks and said he was simply talking with people who came up to him as he was walking past them.

On Saturday, pro-government demonstrators gathered near the government headquarters to express their support for the police. One speaker, Arthur Shek, a founder of The Hong Kong Economic Times, told attendees to use canes or PVC pipes to respond to protesters.

“What do we use them for? To teach our sons,” he said. “So remember one thing: We don’t need force, we need discipline. You use a cane to teach your son — how can you call this violent?”

Hong Kong has a long history of thugs and gang members intimidating protesters. During the pro-democracy Umbrella Movement in 2014, a group of men including some triad members and people apparently from mainland China attacked a protest camp that was occupying a roadway in the Mong Kok district. And in 1989, after soldiers crushed pro-democracy protests in Beijing and other Chinese cities, a Hong Kong event to mourn the dead was canceled after a confrontation between police officers and men believed to have come from the mainland.

After Mrs. Lam’s comments on Monday, one prominent former lawmaker from a traditionally pro-establishment party called on her to resign. “Are triads ruling Hong Kong now?” the former lawmaker, James Tien, wrote on Facebook.

“I’ve never asked you to resign before, but after what happened in Yuen Long last night, if you still don’t resign, Hong Kong will never see peace again!” he added.

Even as Hong Kong officials promised to aggressively pursue the attackers at the train station and tried to discourage reprisals, fears of renewed violence spread on Monday. Local news outlets reported that some residents were told not to go to the center of Yuen Long town in the afternoon and evening.

Some businesses in the area closed early, and HSBC, the largest bank in Hong Kong, told employees they could leave work early because of the possibility of “disruptions” in Yuen Long and the nearby town of Tuen Mun.